The Truth About KG And LIZZy

The Truth About KG And LIZZy 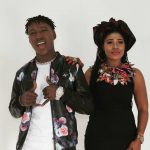 Afrinity Production unveil to you the truth about Gambian singers KG and Lizzy who are a brother-sister music duo from Basse. They are actually siblings, born of the same mother and father.

The well known singers have been in the music industry for the past 5 years now. The idea of forming a music group called KG & LIZZY was actually inspired by their late Father, Foday Kargbo who used to be a huge music lover.

The siblings recorded their first song as a group in October 2015 and since then, they have been releasing good songs and working harder with Collaborations and surprises.

KG made mention of how it has been working with his elder sister, even though sometimes they kind of agree to disagree in the studio.

However, they always end up turning their argument into jokes because they are family. “And honestly my sister Lizzy is very fun to be around. We both have it at the back of our minds that music is business but what keeps us going is the fact that we are blood siblings” he said.

KG further said, their stage performance might look crazy and that’s why some predicted them to boyfriend and girlfriend.

Music is a passion they both have. This was a bit distracted by the death of their father in 2017 which kind of gave them push to where they are today. Their father has been their number one fan since the beginning of their music career in 2015.

“He believed in us when there was no one to listen to us. So after he passed away, we took it upon ourselves to make sure we continue what he has started and making him proud wherever he should be”, said KG.

KG and Lizzy recently release two new songs”Ekomung” and also featured Gambian artist Hussain dada titled ” Show me”. The song has so far gained a lot of reactions and good comments from fans in the Gambia and abroad.

KG and Lizzy love music, and music makes them happy. They can’t see themselves doing anything than music and this shows how much it is of a great course.

The siblings further information was how thankful they are to God, that they cannot do without God and will continue to serve him as good Christians.