18 dead after Air India plane breaks in two at Calicut

18 dead after Air India plane breaks in two at Calicut 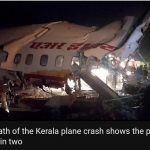 At least 18 people dead in Air India Express plane with 190 people on board at an airport in the southern state of Kerala.

The Boeing 737, on the way from Dubai, shift off the runway in rain and broke in two after landing at Calicut airport, aviation officials said.

Prime Minister Narendra Modi said he was “pained by the plane accident”.

According to BBC, the rescue operation at the crash site has now been completed and survivors have been taken to hospitals in Calicut and Malappuram, according to Kerala Chief Minister Pinarayi Vijayan.

A lot of people were injured, 156 of which are serious, officials say.

Air India Express said the two pilots were among the dead.