Christian council not satisifed with the draft constitution 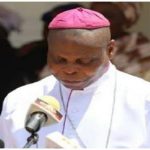