Afrinity Production: Finally Susant Singh Rajput will get justice if he was actually murdered. 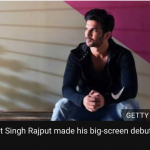 Susant Singh Rajput was found dead in his flat in Mumbai on 14 June. Police said he had killed himself.

But according to various comments and videos put forward by Susant’s fans and confirmed by some renown nurses in India and beyond that the actor was murdered.

Since then, unverified details about his career, financial status and even mental health have dominated headlines.

Afrinity Production in a quiet shock can finally see the stand of people on the death of the Indian Actor as a pure murder case which at the moment triggered a lot of backlash.

And this has led to a tussle over who has jurisdiction to investigate – police in Mumbai or his home state Bihar.

A single judge bench of the Supreme Court said that the Bihar government was competent to request the case be transferred to the Central Bureau of Investigation (CBI) in India.

His family, who have filed a case of abetment to suicide against his ex girlfriend Rhea Chakraborty, have also been asking for the case to be moved away from Mumbai.

On social media, she has been called a “gold digger” who “took away Sushant’s money”.

But the actor’s ex girlfriend has denied any wrongdoing and issued a plea to Home Minister Amit Shah for a fair investigation into Sushant’s death. She had also moved the court asking that the case be heard in Mumbai.