Coronavirus pandemic could be over within two years – WHO head says 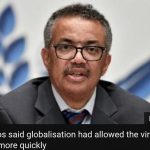 Afrinity Production unbosom to you the message disclose by the head of the World Health Organization (WHO) that he hopes the coronavirus pandemic will be over in under two years.

But he added that current advances in technology could enable the world to halt the virus “in a shorter time”.

“Of course with more connectiveness, the virus has a better chance of spreading,” he said.

“But at the same time, we have also the technology to stop it, and the knowledge to stop it,” he noted, stressing the importance of “national unity, global solidarity”.

On Friday, a number of countries announced their highest numbers of new cases in months.

As with its previous outbreak, the new infections have been linked to churches, and museums, nightclubs and karaoke bars have now been closed in and around the capital Seoul in response.